Life With No Fixed Address

I am obsessed. With a Facebook page. Two actually.

So complete is my obsession that MacGyver is waking every morning to his coffee, served in his red Ferrari mug, and my crash report.

This was a routine winter drive on US87 enroute to Great Falls, Montana in January 2013. But winter conditions this year seem anything but routine. Two Facebook pages which report weather and road conditions for big truck drivers, including multi-vehicle pileups has become my staycation obsession.

“I need to unfriend them,” I tell him almost every day. “It’s freaking me out.”

It’s, like, an addiction that I feed it several times a day. There have been so many storms this winter and consequently many horrific crashes. Before Facebook I knew there were big truck crashes, I saw evidence of crashes, but there was no play-by-play.

Is this year worse? Are people driving when they shouldn’t or driving faster than they should because the available hours to drive and ultimately the hours to make money have been reduced? Because the 30 minute break is a more difficult calculation in bad weather where piles of snow and sheets of ice eliminate dozens of truck parking spots? Because while regulators limit drivers’ flexibility in the name of safety, the retail powerhouses continue to push and consumers demand two-day delivery?

We drive to the conditions. If we don’t like them we stop, like we did in December in Bloomington, IL when an ice storm that left Oklahoma City looking like a Dale Chihuly glass blown sculpture was heading towards us. There’s nothing we do that is so important that we or anyone else should risk getting hurt. On the road, other people’s speed and miscalculations boomerang. And that worries me. 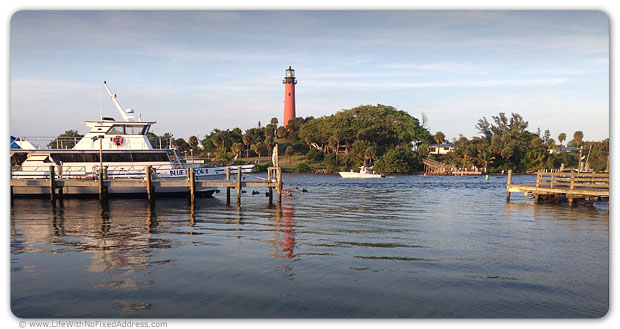 The indomitable travel and trucking duo, Salena Lettera, of The Daily Rant and Ed Godfrey, of Truckin Ed, delivered a load to our ‘hood. We showed off the winter joys of Florida. Dinner at Jetty’s, dockside, overlooking Jupiter Lighthouse.

“Do you really want to go?” he asked this morning. I have been pushing him to hurry with his chores.

We’ve been off the road almost a month. On a staycation. We spent all our money last year, including our Medi-Spa fund, buying a StepDeck trailer and turning it into a Conestoga, a trailer with a tarp on a frame that rolls forward and backward to facilitate easy loading. It eliminates the need to throw heavy tarps to cover a load. It sucked up the holiday money. We do no traveling on credit, cash only! Here we sit.

It’s been productive for MacGyver. He: 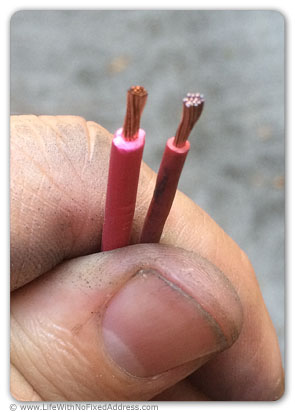 Everything you need to know about MacGyver is summed up in this photo. Every job must be done correctly. On the right, Volvo’s cheap wire, no match for the corrosive road chemicals, used in the chicken lights. On the left, the wire MacGyver selected as the replacement.

He spent about $1,000 on top-of-the-line components. He showed me the cheap, barely-insulated wire that Volvo used — cutting corners, he says, adds up to new a CEO jet — and the wire that he selected.

He replaced our drained truck batteries with glass matte batteries. We had them four years ago, but because they are rounded, they rubbed against the tractor until they, basically, bled to death. The batteries were excellent. Turns out we probably ran the entire truck for several months on one operating battery. He lined the battery compartment with heavy rubber to prevent them from rubbing raw on a bare metal beam.

While MacGyver was being manly, I donned my Suzie Homemaker apron. Cooking three meals-a-day, breakfast, lunch, dinner and afternoon snacks. I make wonderful egg dishes, scrambled with anything and everything left over in the fridge, tomatoes, fresh basil, red onion, bacon, chicken, cheddar, provolone, sweet red peppers, roasted Brussels Sprouts. They are fantastic. Ask him.

I did mountains of laundry because it was so easy. And the taxes. What a job! In addition to this year’s taxes, I sorted and scanned back taxes, receipts and documents and then shredded them, filling 17 garbage bags.

There was some fun too. We tore through the second season of House of Cards in three days. We’re now onto Breaking Bad. No one ever mentions the central theme of this dark, compelling and strangely comedic epic is a regular guy, a schoolteacher and father with a typically not-so-perfect life, including an unexpectedly pregnant wife. He is diagnosed with lung cancer and turns to “cooking meth” to pay for his medical care because he doesn’t want to leave his family mired in debt. His sidekick is a street smart, young guy with potential, but no eduation and, therefore, no real, legal, future. This combination, a modern-day American tale, makes it more transfixing.

A taste of parenthood. We babysat our friend’s two African Grey parrots. Be careful what you say or you will forever hear it. Teelee loves two things more than life itself, it seems, chomping a yellow, No 2 pencil into oblivion, and only yellow pencils. And he is besotted with MacGyver, watching his every move in and out of the house.

Our other amusement is babysitting a friend’s African Grey parrots. One, Teelee is besotted with MacGyver. Lovesick. He trembles whenever MacGyver leaves the room. Teelee stands on MacGyver’s fingers and bows his head, offering it to MacGyver to stroke.

The other one, Tecu, or Cucu, is a wild and crazy guy. We’ve been trying to teach them to say Hell Ya! and Hey Now. So far, they don’t like curse words. Instead they say: How are you? Hello? in both MacGyver’s voice and my voice and their Mistress’s voice. They pock, pock, pock like a chicken, bark like a dog, hiccup, say Ewwwww, What? Repeat every electronic sound they hear including the tone that alerts me to texts. And Teelee, who can whistle the Andy Griffith theme song knocks on his cage three times and says “hello.” That sent me to the front door several times until I figured out it was the parrot.

Are we Vespa people or BMW people? We tried on the BMW for three days, test driving it around Southern Florida. And I like it, but there are several hoops to jump, including an engeering and design project, before this becomes a reality.

We picked up the bike in Fort Lauderdale and drove a half hour to Le Tub, a burger joint on the Intracoastal Waterway in Hollywood, Florida, across the street from our former apartment. The giant $11 burgers, fresh off the grill, are Oprah famous.

Since we went to the Horizons Unlimited motorcycle travelers meeting in Nakusp, British Columbia last year, I have known that it was only a matter of time before a bigger bike rolls into our garage. MacGyver built the storage box and the ramp to go big.

“What are your first impressions,” he asked once we were settled at a waterview table sharing space with the feral lizards.

“I’m ready to write the check now,” I told him. 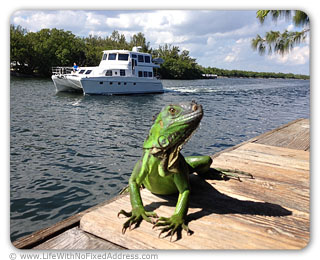 Le Tub used to be a secret, a bar and grill on the Intracoastal Waterway in Hollywood, Florida, made entirely from items scavenged from the beach. Big burgers, cold Buds, cash only. Then Oprah discovered it. The Mercedes and the Bentley’s spill out of the parking lot at lunchtime now, and they take credit cards, but the burgers are still fantastic, grilled to juicy perfection. This little guy joined us for lunch.

Of course, the bike is bigger, sturdier and more comfortable than the Vespa. I sit higher, in the “pillion” position and I can see more. The passenger foot pegs are in a better position for me than the Vespa, which has a notoriously bad placement. But it’s $20,000 new, $15,000 after we sell the Vespa. I don’t need to tell you that MacGyver is a man who opts for quality and value — in a wife, too — in everything he does.  “I’m just doing it to make you more comfortable sweetheart,” he always says. Ha!

Three days of driving and discussing and MacGyver thinks the BMW is great. But the Vespa, he says, taking charge, has a lot to offer. “We’re not ready, yet,” he tells me.

We were saved by four inches. We bought extra insurance on the bike rental so we could test load it into the storage box on the back of the tractor. It’s four inches too long for the current configuration with the ramp.

Four inches! That’s all that came between me and my rash declaration that I was ready to “write the check” for a BMW Motorcycle. It does not fit in the box, we tested it. But MacGyver designed our storage box to its maximum potential. There is room to play. It may take him a year, but he will get that last four inches (see right photo) into the box. Trust me.

You and I know, if it had a fit, we’d be having a different conversation.

While MacGyver works out how to accommodate the BMW, I have a couple of years to save up the money, to make it a cash purchase.

So we are ready for the road, looking for loads, and hoping for dry roads.

Theme by Anders Noren — Up ↑