We decided to experience the Maglev.

The Maglev at Longyong Road station.

We walked to the Maglev station, which is connected to the Shanghai Pudong International Airport. The difference between VIP and economy, other than the round trip price of $24 versus $12, is the VIP seats are two across, the economy, three across. We sat in VIP anyway – no one asked for tickets – positioned the camera, gripped the handrails and the train left the station in a quiet swoooosh.

An LED message board in each car reads the speed as the train rockets out of the station reaching 100 kilometers per hour in seconds.

Current speeds read out in each car.

The train accelerates and decelerates smoothly, there’s no jerking. Our bodies didn’t feel like we were “pulling G’s”. The only confirmation of high speed is looking at the traffic on the roads below the MagLev as the train races by. Whoosh. We flew by the the cars and trucks, leaving them dots in the distance.

The Chinese call it the Train to Nowhere, but it goes somewhere, to the Metro station at Longyang Road, where there’s a McDonald’s and a Chinese-French bakery and where we boarded the Underground for a 20 minute, rush hour, 60-cent ride to People’s Square in downtown Shanghai.

The subway in New York City in rush hour is crowded but that word does not describe the experience in Shanghai. Each time the train door opened, the crowd surged, people inside the train burrowed their way to the door, pushing, squeezing, pressing, meeting the incoming surge pushing back. The crowd, an undulating, unstoppable wave, pressed forward into the train. I was forced up against McGyver behind me. I could feel the pressure on my chest and legs as the sardines in the can readjusted themselves for the next leg.

“The good news is that I won’t fall over,” McGyver said over my head.

A tall, handsome young Chinese man in a dark blue down jacket — really we could have been Richmond, British Columbia, where this is a significant Chinese community, the teenagers ears plugged into headphones, bent over telephone thumbs texting at the speed of the Maglev — about 25-years-old was reaching for a better grip on the pole.  “Excuse me, I’m sorry,” he said in beautiful English, hardly raising his voice above the train noise, yet I could hear him perfectly. Better English than our English we said later. He asked if we knew our stop.
“People’s Square,” I said.

We were ejected in a rush of bodies, feet barely touching the floor, with the crowd at our stop. It was early. Nothing was open. It was cold. With only the clothes for a spring morning in Dallas, we layered up like Michelin men, short-sleeved t-shirt topped by a long-sleeved t-shirt topped by the Lufthansa First Class sweaters, me another hoodie and a shawl wrapped around my neck. We did once-a-round-the-block past the Starbucks looking for a place to buy Char Siu Bao, barbecued pork bun, my favorite Chinese dim sum delicacy. Unfortunately no, but we did find some chicken feet and duck necks, had we had more time, I would have sat down, tucked into a couple of plates and shocked the locals. 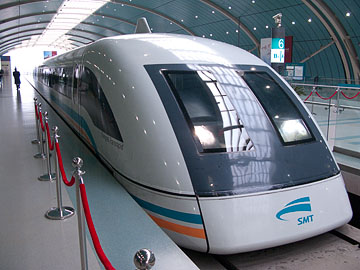 Back to Line 2 on the Underground octopus-grid, thank goodness for McGyver and his love of maps, at East Nanjing Road we headed downstairs for the return trip to the airport and our last First Class flight on United Airlines.

The flight is a graphic example of the world’s future growth. We were three in an eight-seat section Dallas-to-Frankfurt, six in a ten-seat section to Frankfurt-to-Bangkok and the 12-seat section Shanghai-to- San Francisco – full! Business class – full!

The future is East.

One thought on “Faster Than a Formula One Car”