The Petro was deserted when we pulled in to fuel in West Memphis, Arkansas.

“Ain’t no ‘lectricity ma’am,” the pump jockey called as he was filling the paper towel dispenser at the fuel island. “Went out yesterday at six o’clock (Tues., April 26). No power anywhere. The restaurant got hit bad too.”

He was talking about the severe thunderstorms and maybe a tornado that roared through Arkansas Tuesday night, snapping the tree in front of the Iron Skillet at the base, tearing the roof of the McDonald’s next door and filling the parking lot with water. 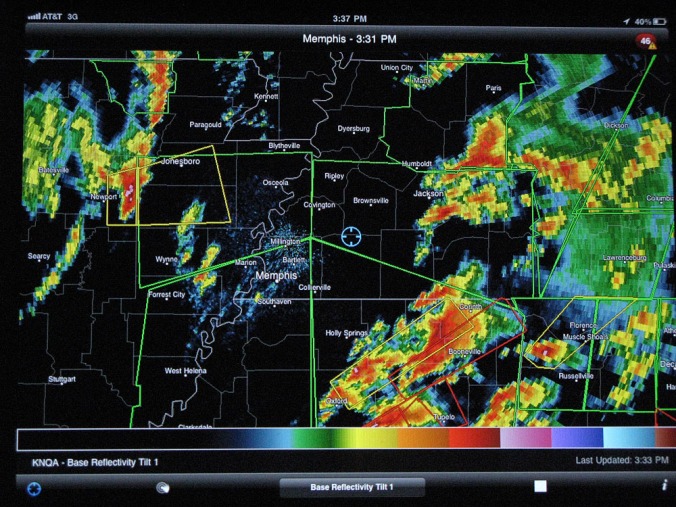 RadarScope on Wednesday, April 27. Tornadoes heading to Tuscaloosa, AL south of our position.

We were a few hours behind this storm — having skirted its southernmost edge the night before on our way to Dallas — and a little north of another storm that was gaining strength and in a few hours would flattened the northern part of Tuscaloosa, Alabama, a city that we cross a couple of times a month between Atlanta and Los Angeles.

The damage we saw in Arkansas from the first of the one-two punch storms across the south was minor compared to the devastation wreaked in Alabama and Mississippi that killed about 300 people.

If trees had knees, the ones in Arkansas would need hip waders. The state looked like the land of 10,000 lakes, the nickname for Minnesota, when we arrived. Every water hole we passed was overflowing, gullies, ponds, lakes, creeks, rivers. The rice paddies and the farmer’s fields needed rowboats not tractors.

In West Memphis, the weather radio began squawking every few minutes warning of “quarter-sized hail” moving through Holly Springs, Mississippi, (see position on RadarScope) about 30 miles south of us. Severe thunderstorms, along the northern edge of the storm, were heading northeast, meaning the storm would cross I-40, our route as far as Nashville, either ahead or behind us. We were bound for Ohio.

The weather radio, which tells us of warnings in the area, is keyed on the county system, telling us which counties storms will cross. We travel 48 states and know very few county names, Florida alone has 67 counties. We always wish the national weather service would cross reference with the Interstates, every once in awhile they do and it is helpful. A couple of weeks ago driving through North Carolina, they used the Charlotte Motor Speedway as a reference point, which told me I was good to keep driving through the torrential rain, heading northwest to Virginia, the tornado was heading northeast to Raleigh.

We also use the radar forecast on the iPad to give us an instant overview of weather and wind for the entire country, we can zoom in on specific areas. This helps us decide if we really want that load through Montana.

But seeing the damage in Arkansas, and having just grazed the southern edge of that storm while traveling I-20 the night before to Dallas, McGyver decided we needed more information. Now.

Lying in the bunk, while I was driving across the Mississippi River, he spent $10 and downloaded the RadarScope iPad app. This app sets our vehicle in a blue target on the radar map surrounded by the weather warnings.

On Wednesday afternoon at 1531 CT, as the tornadoes south of us were gathering energy, the screen was green with flash flood warnings, punctuated by yellow, warning of severe thunderstorms and hail and red, the tornado warnings.

Driving in and around heavy weather is knowledge with some luck. Knowing where the weather is, so we can decide when to go and when to stop. If we’re moving 60 mph and a storm is behind us traveling at 45 mph, there’s no point stopping and waiting for it.

If it’s raining hard, which happens often in the spring and summer in the south, and there is no other danger of tornado or severe hail, it is better to keep moving at even 20 mph than to try and find a safe place to stop because we will soon be out of the weather band.

When we were northeast of Memphis on I-40, traveling at 60 mph, the storm was moving at 65 mph in the same direction, but we were still north of the storm track. Out of the screen south of us were the tornadoes heading to Alabama.

We ran into the southernmost edge of the first storm that ripped through Arkansas on Tuesday night. On I-20, McGyver stopped in Shreveport, Louisiana to fuel. The truck felt like it was healing to starboard, he said. The torrential rain, in sheets, washing over the port (left) side. Strobe lightning lit up the skies for miles around.

“The truck felt like a boat, water pouring onto the hood,” he said. It was raining so hard he couldn’t get inside to the fuel desk for the receipt. He parked and sat for 45 minutes and waited until the weather band crossed him.

We saw the damage of the Arkansas storm as we approached West Memphis, a giant tree, the stump about two feet across snapped like a twig and tossed aside. A one storey building’s roof was sitting in the field next to it. Highway signs and billboards bent in half.

We crossed the Mississippi River into Tennessee, it was flowing high and fast. The Loosahatchie River had overflowed its banks beyond Memphis. Edward Scissorhands had too much to drink, giant trees along the Interstate were sliced and diced, the red and gold wood pulp brilliant in the post-storm sunshine. The storm had jumped the highway here.

Fifty miles east of Nashville, we were hit by gobs of rain. Yes, gobs, like a giant spitting at the window.

“What the hell is that,” McGyver shouted at me while I making sandwiches in the bunk. “I can barely see through it.” In a few minutes it subsided. He had slowed to 40 mph.

We turned north on I-65, traveling through Nashville about  6 PM CT. The rain came in spurts, then dribbles and finally stopped.

A few hours later in Jeffersonville, Ohio another storm. This one packed gusts of 60 mph but little rain. McGyver stopped at the TA to fuel and a gust of wind shook the hose spraying diesel over his face, beard, chest and arms, the worst of our storm damage, fixed with a shower.

We were very lucky this trip.

One thought on “Technology and a Lot of Luck”