“Feel this.” It was a command.

MacGyver had lifted his flexed bicep to my chin.

It’s been 14 months since he picked up our first tarp and threw it on the deck of our rented, split-axle, 48-foot stepdeck trailer, nicknamed the Lead Sled to reflect its weight.

This is the Lead Sled, loaded with an MRI bound for Miami International Airport and ultimately Santiago, Chile. The shippers were awesome. It was a tricky load, but once finished we were invited to join the crew for lunch before MacGyver tarped it. The shipper said he prefers working with Owner Operators because it’s their equipment and they are careful with the freight.

His only comment that hot July day in Boise, Idaho was “these are supposed to be the lightweight tarps.” Technically, yes. But not with a ten foot drop. He’s been getting a workout, we both have. We can walk a couple of miles around the trailer while loading and securing the freight.

Trucking is a commodity business where price almost always trumps service. Often, the best way for any small business, but especially a one-truck operation like ours, to make money, is to keep it from The Man. So we have invested, heavily, in saving money.

Our first strategy was fuel efficient and pocket-friendly modifications to the tractor. For instance, we have low rolling resistance Michelin tires on the steers and drives. We have 410,000 miles on our engine oil because we use the OPS oil purification and bypass system.

The next step in this strategy was to buy our own trailer.

We purchased a 2013 Fontaine Infinity, a 51-foot stepdeck, which has a 10 foot top deck and 41 foot bottom deck, a sliding axle to make it Canada-legal and container locks to carry one 40-foot shipping container or two, 20-foot containers. (If you’ve ever wondered why a truck is roaring down the road with a shipping container sitting effortlessly on its deck, sin chains, it’s because of these locks on the underside). We succumbed to trucker bling and vanity and added aluminum wheels, which only save 200 pounds on weight, but are shiny and pretty. Total cost $38,250 including the 12.5% Federal Excise Tax.

There are four reasons why we bought the trailer.

First, our savings have been earning no interest since the Great Financial Crisis of 2008.

Two, there is no fuel, mileage, ad valorem or any other tax on pulling a trailer down the highway. These taxes all apply to the tractor and swipe away at profit.

Safety at the Port of Tacoma means wearing a florry vest (Australian for fluorescent working vest, see Slanglish.) But every driver, including city-guy MacGyver, must drive and load the tractors onto their trailers. Longshoremen don’t do it. Luckily John Deere thought of everything. Tractors are two-speeds tortoise and hare, really!, When the front tires of the lead tractor bumped the front step of the trailer it climbed onto the step like it was a six inch curb.

And four, there is minimal ongoing cost in terms of repairs, but modifications, such as low rolling resistance tires, will increase fuel efficiency keeping more money in our pockets.

We could have made the purchase through Landstar and financed it with the company. It seemed the interest would be 8.9 percent plus a $100 application fee. Using an online auto loan calculator the payment, which is probably pretty close to what Landstar would use, the payments rang in at $220 a week, $11,400 a year and $45,601 to call it ours. Paying cash in this scenario saved us $7,351.

Many small businessowners feel they can’t afford to pay cash for capital expenses. Or they think that a trailer loan is good debt because it’s deductible. Our trailer is depreciable over five years.

While we now take great delight in keeping cash away from The Man, we were forced into this strategy. When we arrived in the US we discovered our stellar Canadian credit histories irrelevant. The financial industry treated us as if we walked out of the jungle. It took us four years and several steps including a couple of sleight-of-hand manoeuvres that Wall Street would be proud of to get credit cards.

In a rough calculation spanning 15 years of business, paying cash has saved us at least $40,000 in interest assuming we used one year credit card financing for major purchases.

How did we get started on a cash-only business?

Saving is one of those things that is simple but not easy. We pay cash for personal and business purchases. We watched a green and purple TV for a year before buying our first flat screen in 2006. We lived in a 475 square foot New York City apartment for a decade because an extra bedroom would have cost an additional $1,000 a month and we prefer to buy experiences, such as travel, with our money. We never, ever buy anything for ourselves if the business needs something first.

It happened because we started. My first goal was $1,500, which felt like $15,000 because we had no extra money. I was clipping coupons for groceries. I thought about saving every day. I was helped in the early 2000s because interest was paid on savings. And by my ING Direct savings account that allowed me to have many different sub accounts under one umbrella account and let me transfer ANY amount from our checking account to ING online, even paltry amounts like $4.52, which I sometimes still do.

I saved, and continue to save, every week. I do whatever I can to round up to the next $10.

It took less than a year to get $1,500. Then I decided we needed $4,500 in emergency funds, which was three months of survival living, rent, food — I cooked three meals a day — telephone and subway card. This took another year. I divided the $4,500 into three, 90 day CDs so that one was cashable every 30 days. My thinking was, if there’s no income, I can cash a CD and pay the rent, buy groceries still have a phone and remain in business.

We never cashed the CDs for monthly expenses, each term they rolled over with interest. The money came with a bonus. Confidence. Once we had emergencies covered we felt we could invest in the business.

Our first big move was to buy $7,000 in advertising for our business. We paid for it on American Express, for the points, and paid the bill in cash at the end of the month from cash flow. It brought us a return on the investment five times over in the first year.

Business progressed and we opened retirement IRAs and a Health Savings Account (HSA) but we never lost the immigrant attitude of paying in cash and repaying our savings with interest.

We call our Emergency Fund the Fuck You Account because survival in business means avoiding working without profit. It starts with $1,000. Just enough money to avoid going onto your credit card for an unexpected business or personal expense. An owner operator should aim to have $5,000 in emergency money. Enough to pay for a major truck repair and to deadhead across the country.

I found a t-shirt in a Thailand street market last March bearing the slogan — Fuck You Pay Me — after roaring with laughter for ten minutes, I snapped it up for $8. And I think it when I say “I’m interested in your load, but I need additional revenue.”

Often corporations ask small business for a discount just to see if they will get one. Or they have more money in the budget if someone asks for it. Money in the bank gives the little guy the power to say I want more, or no thanks. 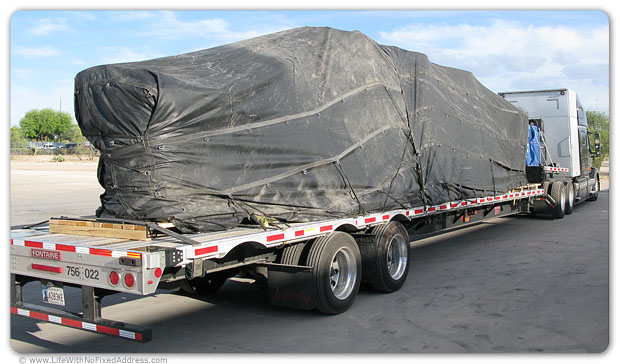 It was this load, industrial washing equipment, picked up in Arizona in 100+F weather, headed to Canada, where MacGyver drew his line in the sand. The tarping procedure was maddening. He’d always been attracted to the covered wagon, a trailer covered with a tarping system built on a frame. We are actively on the hunt to acquire this piece of equipment.

And the saving never ends. MacGyver has decided his guns are big enough. He wants a covered wagon, a rolling tarp system, so after the loads are strapped or chained to the deck, a tarp is pulled across the trailer, instead of him wrapping the load like a present.

We anticipate it will open up more specialized freight opportunities.

And I will no longer fear MacGyver losing a battle to wind, rain or ice, 13-feet six inches above the ground, while manhandling a tarp over the load.