We smelled it before we turned the corner. The heady aroma of sizzling beef.

“Brought to you by iOS9,” said MacGyver as we pulled up to The Brick. A one-story, red brick building with the bad ass architectural element of a door straight out the back for quick getaways whether from the spouse, the law or the revenuers.

The Brick, a burger and beer joint, located in Jonesville, Indiana, off I-65, first opened for business in the early 1900s. During Prohibition it became a gas station. Its current look is from the 70s, fake wood paneling and naugahyde booths and bar stools.

The new iPhone operating system has a right swipe to find local dining, shopping and entertainment. He clicked on the “bar” tab and up came The Brick. The Yelp reviews say: Talk to Columbus (Indiana) people and they’ll tell you The Brick has the best burger anywhere hands down.

Skeptical about the location, MacGyver checked the address against the GPS, Apple maps and Google maps. Sure enough, off the Interstate, off the State Highway, down a County Road, through farm country into the hamlet of Jonesville, a block from the church, next to the railroad tracks sits The Brick.

Looking through the front window into The Brick. A popular Columbus, Indiana area bar, known for its great burgers, housed in a one-story, red brick building, built in the 1900s, next to the railroad tracks and down the road from the church in Jonesville.

First opened in the early 1900s, the original wooden bar has been preserved. It became a gas station during Prohibition and in the 70s was given its current look, fake wood paneling, dotted with photos of the area and its residents, and naugahyde bar stools and booths. Forlorn country tunes blare from a jukebox in the back, competing with Fox News on the flat screen TV in the front corner.

The fresh-off-the-grill cheeseburger deluxe with lettuce, tomato and grilled onions for $5.50, arrived at our table on wax paper, hot and juicy. The menu boasts two items, burgers or dogs, three sides, soup, chili, or chips. No plates. No cutlery. No deep fryer. The only downside, smoking allowed.

Our meal last night was a sharp contrast to, and yet, in keeping with our delicious-meals weekend, made possible by Sabine, our BMW motorcycle. We rode Sabine from Cincinnati, Ohio to Greenback, Tennessee, south of Knoxville, to a 40th birthday celebration at Century Harvest Farms, a 350 acre farm owned by Christopher and Shona Burger. The farm uses organic and sustainable farming practices, like those common a hundred years ago, and specializes in producing East Tennessee 100% grass-fed beef, pastured pork, chicken and eggs and seasonal vegetables. The Burgers alternate crops, cultivate legumes and use the fertilizer produced naturally by the farm’s animals. 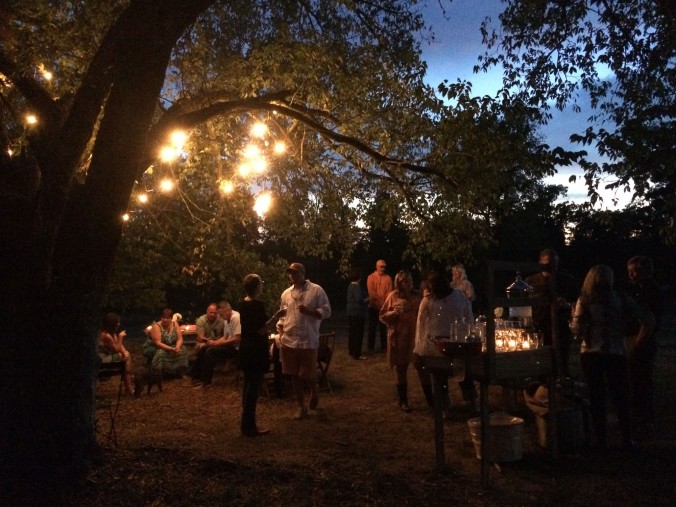 Chef Dustin Busby, formerly of Blackberry Farm, who manages the farm’s industrial kitchen, conjured up a magical, setting for this outdoor feast in two parts — farm grown and made charcuterie and the main meals. Under a canopy of trees strung with white lights, Dustin served his farm specialties, pates, salamis and savoury jams, which are made on site and sold at the Maryville Farmers Market and online.

If you’re in the Knoxville area, take a farm tour.

This is the upside of the Year of Slow Freight, exploring the roads less traveled.