Thirtyish man, well-dressed in western-style clothing — dark sunglasses, black skinny pants, pink, long-sleeved collared shirt, and loafers with a hip skinny square toe — approaches us as we’re walking through the business district towards the waterfront and the Galle Face Hotel. Ice-cold drinks on our minds.

At the Gangaramaya Buddhist Temple, Raschman offers a blessing to Buddha on my behalf, asking for a safe journey for me and MacGyver in Sri Lanka.

He’s chatty. Where you from? When did you arrive? And so it starts. He waves an ID badge at us and says: “Don’t worry, I’m not a tour guide.”

“I’m going to my temple,” he says in excellent accented English. “It’s a special day at my Buddhist temple. One day a year it is open to see the special ruby and diamond and gold Buddhas. You should go see this. It’s only until six o’clock.” It is now four o’clock.

We’re polite, but not jumping at his idea. Not one hour ago, sitting in the Pagoda Tea Room, I told MacGyver that I am “templed-out” in my travels.

Our new friend continues to indicate, as he walks with us, that the temple is close by and since he’s going he can show us. “It’s my temple,” he says several times. Suddenly a tuktuk is waved over. Come with me, he says, and we three climb in, at his invitation.

India-lite is how ex-patriate Westerners describe Sri Lanka. And it is. It is cleaner, the traffic, although clogged and dancing to a drummer we don’t understand, is still manageable. The vehicles slow down and even stop for pedestrians, including us. In India, cross the street at your own peril.

But it is very much like India in that everyone, at heart, is an entrepreneur and their commercial quarry is the tourist.

We stop at what I quickly realize is the Gangaramaya Buddhist Temple, well-documented in guide books. I offer to pay the tuktuk driver, because nothing in life is free, especially when traveling and interacting with locals. He waves me away — you will be charged foreigner rate, he says — and speaks to the driver.

“He will wait,” Raschman says. We pay 600 Sri Lankan Rupees (SLR) for entry for two, $4. He walks us through the entire temple, explaining as we go, like a tour guide. He gets us a meeting with one of the monks-in-residence, who he says he’s known for 25 years. In the inner, INNER sanctum. We see the three ruby Buddhas prized by the temple. He keeps pointing out that we are the only tourists inside the inner sanctum. The monk blesses us and ties a red string with five white beads on it around our wrist. 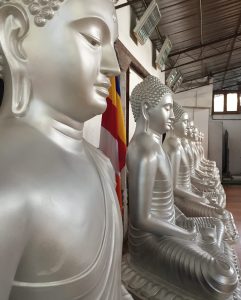 The second level of the Gangaramaya Buddhist Temple is ringed with buddha statues.

Both MacGyver and I, without looking at each other, know there will be a price to be paid. But what. We’re not backpackers, so we can afford whatever it will be, and Raschman knows we can pay. He’s sized us up.

Outside the temple, the same tuktuk driver reappears. For the second time I think, he is a VERY well-dressed driver, wearing a pressed, iridescent turquoise raw silk shirt.

Raschman says he will show us a Hindu temple. We drive one kilometer away, to a Tamil, Madurai-style temple, one that we crawled through in Trichy two years ago in the Indian State of Tamil Nadu. A man shows up with a basket, sits on the ground in front of us. A snake charmer. A cobra slithers up from the basket. We surprise Raschman that we don’t want a photo. The man quickly re-wraps his basket and leaves.

Raschman says he has one more temple to show us, the Seema Malaka Meditation Center on Beira Lake, designed by famed Sri Lankan architect Geoffrey Bawa. His information is all guide book, nothing extra.

“We need to get going to the hotel,” says MacGyver. We climb back into the same tuktuk. We drive to the Kingsbury Hotel, still a 20 minute walk from the Galle Face Hotel, our destination.

“The driver will drop me here and take you to the Galle Face,” Raschman says. I say, I will pay the driver. They confer for a moment in Sinhalese.

MacGyver steps in: “I was thinking 300 rupees,” he says. “Come on, let’s go,” he says to me and we scramble out of the tuktuk

“Since you’re not a guide, and you invited us, then you pay,” MacGyver says to Raschman and we turned and headed towards the Galle Face Hotel without looking back.

“They always go too big. Six thousand rupees, even four thousand. I would have paid 1,000 rupees,” I told MacGyver.

“When he started at the ridiculous amount of 6,000 we had to go ridiculously the other way,” MacGyver says. “I thought we’d pay something too, probably about 1,000.

“I think he was shocked that we challenged him.”

Rethinking the incident later, we decided we were just as shocked as he was. He didn’t know what to do when we just turned and walked away. And we thought for sure that they’d chase us and we’d pay something.

Maybe we’ll have to find his blog and get his take on our international incident.